We are still in London, Ketki is doing fine now, and its weekend! We all went for some shopping and had lunch outside. While we were coming back home, I called up Nisarg. I so wished it him and his wife could join us. Them being around would be icing on the cake. But Nikita, his wife, quite flatly said there were more important things that they need to attend, that they don’t have leaves, that leaves were purged as festive times were around the corner. And anyways next month they had plans of celebrating Christmas and new year together. So, what’s the rush? But we will be gone by then, I wanted to meet them too.

I made a grumpy face, seeing which Suvin enquired what was the matter. I told him the entire incident, to which he blamed me for over reacting. Rather his precise words were, “Don’t behave like a typical mother in law”, I have never treated Ketki and Nikita differently, I loved them both.

But when she spoke to me it was rather flat and non empathetic, and even Nisarg didn’t say anything, rather defended her. No one is understanding, why I want both of them to be here, I want to see them for its been more than 3 years I have met them, they left in a few days after marriage and post that Its just Facetime and video calls.

Since evening, I didn’t speak to anyone. The temperatures were dropping in London as it is December already. As per the news channels and Weather statistics and records it is the coldest December ever. Ketki is also on her brother and sister in laws side, I was all alone. What is hurting me the most is my very own darling husband is also not with me on this, he also wants me to think practically, but I can’t think practically. All my decisions have been taken by heart. All my decisions have always been by heart. While I am sitting alone, the rest three were busy watching a game of football, enjoying binge eating and the two men were having a gala time over drinks. The temperature plummeted further towards evening. I could see something brewing between son-in-law and father-in-law.

I am sulking in my “kop- bhawan”, read as kitchen. The only person who is trying to strike a conversation and feel me included is my son-in-law, Sameer. He is a very balanced person, good choice made by Ketki. I thought.  He came to the kitchen to enquire if I was ok, to which I just sake of formality said, yes. “let’s go, mom I will teach you a relaxation technique. It’s an amazing stress buster”, he said. They have a designated place for yoga in their house, Suvin was just observing things. As I started following the instructions in the audio, it took half an hour. When I opened my eyes, Sameer was still there waiting or he might have just come back to check. “I am already feeling good” I said “Drink this, and you will feel even better”, Sameer said. Upon enquiring what is it, he replies that its very good for the body to enhance mood and relaxes further, good to have it post relaxation. When I insisted about ingredients, he said its “jau ka paani, and will taste bitter. And is best taken chilled” I had no reason to doubt him for many reasons, he is family, the relaxation technique that he suggested really helped me and moreover right now is the only one in my team. So, I took it, the taste was bad, but the more I started gulping it down the more I wanted to have and I was feeling more relaxed. I asked him if it’s not harmful, can I have one more glass of “Jau ka Paani”, which he happily agreed. In the corner, I could see Ketki and Suvin giggling, I was in no mood to get bothered by it. Whatever it was, I was feeling good tipsy although. I didn’t realize when I slept.

In the morning I woke up with heavy head and loud laughter’s in the house, I went to the kitchen and saw two green Tuborg beer bottles in the trash, I was thinking did I….? when I heard Suvin saying to Sameer, “Beta, you did what I couldn’t for so many years. Ha ha ha ha” 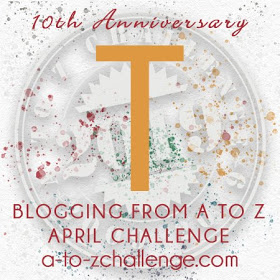 This blog of part of #A2Z Challenge, there will be 26 blogs in this series all the blogs are in continuation. I am writing them from Z to A, as the story also flows from Death towards life. Hope you enjoy knowing Antara’s journey.