I first met my wife during college fest when we co-hosted a felicitation ceremony. Our first picture together has my eyes closed and mouth open in front of microphone. And my wife wears an amused look. My thinking and talking have always been in a long-distance relationship. Every time I think hard while talking, I invariably close my eyes. Blame the weird brain wirings.

Soon, we were dating and spending more time reading each other over our books. Thankfully, we scampered past our graduation. We planned everything about our future. Right from color of our first car to the name of corporation (if we ever started one!). Successful careers was of paramount importance. Time rolled and before we could realize, both of us landed in Delhi. Got our first jobs, got married. And thought that we have made it!

Technology and conventional jobs baffled me since the start of career and I always aspired for an alternative profession. Wherein I have my own working hours, can operate out of even a Goa shack, make money without hassles of being dressed in business formals, and the ever so cliched line of ‘doing what I loved’!! Well, God has his anti-climactic ways with me and as luck would have it, I became a Sales Guy!! And here I was, doing everything that I dreaded. I should have remembered what Rhonda Byrne says in The Secret! “The universe doesn’t understand the word ‘No’!” To add more to woes if they weren’t enough, two affairs with Network Marketing left me poorer by about 10 Lacs and richer in criticism from kith and kin.

My spouse on the other hand, has been more sensible and orthodox. And am I thankful that she was ‘Old School’ then? Hell Yeah!! Being a Software Engineer, she wrote codes in formative years of her career. To gradually move into recruitment Industry. While she was doing a near perfect job of balancing her work and family, and I had become a General Manager with an IT firm, we still played MS Excel Kabbaddi Premier League with our expenses. Every month! Being behind on our bills by several grands. Every damn month!! Every time I closed the lid of laptop, we looked at each other and wondered, ‘Is this what we aspired to do when we started dating??’

About 3 years back on a weekend afternoon, she told me that she was toying with idea of writing blogs. While I welcomed the idea, I inquired what would she write about? “Recruitment?” “Would you quit your full-time job?”. I imagined us falling behind several times over without her active contribution. She said she wanted to share her views about Parenting and Relationship in Modern Times! And she would write in her leisure. Without rocking the boat! I heaved a sigh of relief.

A couple of days later, she informed me that she had participated in an online survey for a site mycity4kids, now renamed as Momspresso. Gangadhar Shastri hi Shaktimaan hai!!  And they were giving out HP Printer-Scanner-Copier. I advised her to not squander her time on online gimmicks. A few days later, the gimmick arrived at our doorsteps. This was the start of her journey as a part time Blogger! We still use the gadget, as recent as today morning.

Soon enough, she was writing for websites like BabyChakra, WomensWeb and MomsPresso too, of course!! Every now and then, she would tell me there were new likes and comments on her blog. And I would tell her to keep it up! She expanded into writing in Hindi as well as Marathi. Slowly, she was getting noticed. She got a Twitter handle dedicated for her blogs. A WordPress account to post her blogs. She continued to write under her boss’s nose. Her lovely smile that had withered away in the daily jugglery of work, kids and home slowly started coming back. Although, still sporadic! But it was a welcome change.

One day she called me and asked me for an excuse she wanted to give her boss for a Brand Association event being held at Hotel Ramada. I didn’t understand a thing about it. However, she got the excuse, passed it on to her unsuspecting boss and attended the event. She came back with several tetra pack of canned juice. “Goodies!”, she exulted as she placed two huge polybags on the table. She wrote a blog, posted on her Facebook and got incentivized too!! Couple of more excuses and a couple of more events into blogging, she started making slow money and I was treated with more frequent smiles.

A chanced medical condition last year forced her to go on a sabbatical. Although, she recovered quickly from the ailment, she never got back to job. It was a major decision, but she seemed quite confident. And just about a year and half later, she is a completely transformed lady!

I will now share what it feels to have a ‘Blogger Spouse’. Hope I am not spilling enough of her secrets. But as they say, sharing is caring. So, here we go!

Even today, we plan our expenses on Excel every Tuesday. But we don’t park any amount against ‘Grocery’ head. Her Brand Associations keep her e-wallets topped up enough for groceries as well as restaurant visits. I don’t remember fishing out card at any restaurant in last 6 months. While it is also true, that we haven’t started a column with tab ‘Blogging Income’ yet, my guess is it wouldn’t take longer than 4 months as I write today.

Wherever we go, her Instagram posts continue to roll out. While my son and I crib over a traffic jam while driving down Mussoorie, she is busy typing a blog about how Dhabbe ki Maggi came as a life saviour. My son and I look at each other confused as we sit down for a lunch at Delhi Heights while she interview the Chef for recipe of Daal Khichdi. Although, I have offered to spend a couple of grands to get more Instagram followers, she has always insisted on having clean and organic account. And until few years ago, I used to think Instagram was a rich man’s version of Facebook that required better data speed and higher configuration of smartphone. These days, there’s nothing unusual about clicking pictures while shopping at Janpath or shooting a ‘Vlog’ of Tandoori Chai at Sakkardara Chowk at Nagpur

Affiliate Marketing is a very potent tool for businesses to gain visibility. With advent of new e-commerce players every day, more and more manufacturers are jumping the bandwagon. While our pet Labrador, Ginger has always been more cattle than a dog, he wasn’t bothered by Online platform anyways. Until recently! My wife’s Social Media Affiliations have the courier boy visiting us daily. Initially, Ginger did bark occasionally at delivery guys but soon reverted to his cattle-like silent demeanor. Our home is full of products she reviews and writes about. Honestly, we haven’t quite planned it. But we could distribute Colognes, Face Packs, Soothing Creams, Deodorants to our relatives and friends this Diwali. In case you happen to get a gift from us, be sure about the expiry dates. The Blogger ensures product passes toughest quality tests. Ourselves 😊!!

I have been quite popular among my friends. A typical Libran, you know we think we know-it-all! Friends would frequently call me and seek advice, gimmicks and what-nots. They continue to call me even today. But now, I don’t find it surprising if I receive a late night Whatsapp message from a long-lost friend asking me for our Queen’s contact info. They want to speak to her more than they would want to speak to me. Whether it’s women specific topics or paycheck related matters, suddenly, I realize we have a Wifeypedia at home.

“Nikunj, this blogchatter will help my DA climb up!” “Ahho, my Alexa ranking has improved and is now in 5 digits”. Such cries are normal in our house. Guessing it would be too embarrassing to ask her what DA meant and my rapport with Alexa was limited to her being Amazon’s voice based AI service. So, I googled those jargons. I found that DA or Domain Authority is a measure of how well a website is likely to perform in search engine results. Another SEO tool that she adulates is Alexa Rank. It allows one to keep track of the ranking of their site.

“Honey, Don’t you think a more organised Insta grid would be a better idea?”. “Do you think I should pick Freedom as a theme in August?”. “Suno, how do you like the idea that we write the fiction backwards where the character ages in reverse?”. “Ask Linto if he knows latest video editing freeware we could use”. “If you have some time while you’re in Metro, read the latest I have written on children’s books?”. “I need a large image labelled for reuse from Google”.

Whatever she says, I raise my brow and give her a Thumbs Up! Afterall, who would want to stand on Rafale runway?? But I do silently admire how committed and engrossed she is with her writing and is switched on 24x7x365 days. She is abreast of latest trends, news and current affairs. Thanks to her tryst with Social media!

In her journey, I have had my learnings. First thing first, Blogging is serious profession and goes deeper than I initially thought. Not everyone who writes great necessarily becomes a good blogger. Consistency and imposed self-discipline play a formidable role in blogging career. And more than anything else, publishing blogs liberate her. The twinkle in her eyes and the ear to ear grin whenever she features as ‘Blogger of the week’ or ‘most authoritative mom blog’ makes her super excited. My immediate family is very proud of her writing work and can’t stop heaping praises. While she continues to be an excellent mom and wife, as a woman, she has completely transformed. Someone who is in control and is confident! And Empowered!!

While she continues to raise the bar and shatter the glass ceiling that she herself sets, I am glad we finally got what I yearned for. An alternative profession that has flexible timings, Office Anywhere and working out of her Sarong. While she may not have come far enough, she says every blogger has a unique journey. Their own! And followers, brands and other bells and whistles shouldn’t be overwhelming. Quite recently, my dad snubbed his very good friend when he inquired how much money she earned from blogging. “Aren’t we insulting the institution of writing by asking such questions?” is what he asked back. That makes me quite proud of him. And her too!

Last evening, as we sat for our Tuesday excel review, I realized there was a difference. Not much in terms of money, but of how we have tip toed to where she has reached today. As if it were a deal labelled ‘Closed Won’ on my CRM, we toggled to Amazon Prime to watch ‘A Star is Born’! The confidence that being satisfied generates is far more than a ching she heard on her mobile that read, ‘Acct XX519 credited with xxxxx Info: Salary’

I gaze at her while she watches Lady Gaga render a powerful performance on our laptop screen and wonder, ‘Have we made it yet?’ and the answer is resounding ‘YES!! 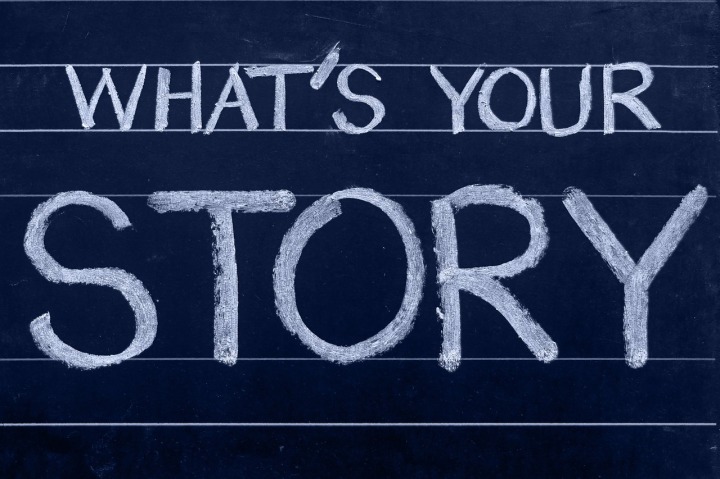