I am sure you have watched many superhero movies, so have I. My favorite forever is Spiderman. Such a simple and humble boy who has so many powers and lives by the motto ‘With great power comes great responsibility’.

It was long back when we all watched Spiderman 3, I am sure you remember when Peter Parker fights with Venom. The black Spiderman, who is more powerful and mean than our very own friendly neighbour Spidey. The scene when Harry sacrifices himself to save Peter. In that scene, Peter makes a sound cage, and holds Venom inside. My brain that day registered the fact that negative energies fear loud sounds.

And religion is what gives us hope to stay guarded against evil, Right?

India is a land of religion; we have given birth to many religions and nurtured many more. Religion shows a human being right way of living. As per Sociology, ‘Religion is the study of beliefs and practices’. Although why do we need religion, which religion is better than other, and which is the better way to worship is different. However, while worshiping God, every religion focuses on one or many sounds, so let’s explore 8 dominant sounds of religions.

It may be any religion, the unique sound(s) play a significant role. The sounds always guide us, ward evil and give peace to the mind and soul. 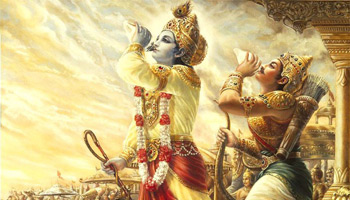 It comes to me as top of the head recall, as the first most powerful sound. Don’t we see it during religious ceremonies at home and during all the major pujas, and in temples as well? I clearly remember Mahendra Kapoor singing Sambhavami Yugay Yugay to be followed by a long blow of conch in Title track of B R Chopra’s Mahabharata

It holds a prominent place in Indian mythology. So, what does it exactly do? It is said that if the Conch/ Shankh is blown in right way, then the energy it emits help in reducing the distressing frequencies and wards off germs that cause various diseases.

It is also said that keeping a right-handed Conch at home helps in boosting good luck, health and prosperity. Moreover, its surely great in boosting lung capacity. It is the closest natural inspiration for Fibonacci spiral. During the research about this blog, I came across various types and names of the conch, all the Pandavas and Shri Krishna had their own conch with different names and specialities. For example,  Arjuna had Devadatta, Yudhishtira had Ananthavijaya, Bheema’s conch was Paundra, Nakula had Sughosha, Sahadeva had Manipushpaka and Shri Krishna had Pancajanya that he won by slaying a demon called Pancajana, I have a terrific propensity to write about conch. But, paucity of space demands that I better move to the next sound. 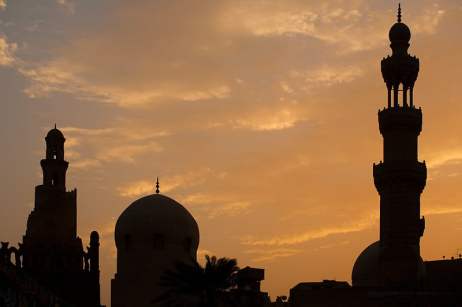 It’s a call of prayer given by a muezzin. A muezzin is a person who recites Azaan from the mosque. Five times a day. It’s in Arabic language. The origin of this means ‘to listen, to hear, to be informed’. It is basically to give a heads up to people that its time for the prayer.

The history of when and where it started goes back to 1400 yes ago. Bilal ibn Rabah al-Habashi was the first person to do the role of a muezzin. He was chosen by Prophet Mohammad, because of his ability to sing melodious and loud. 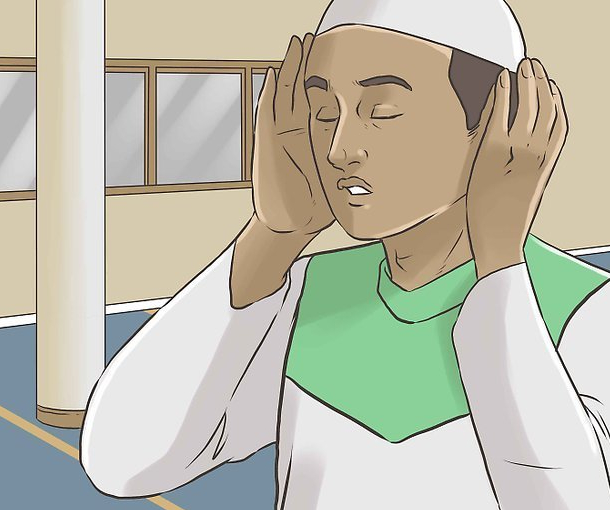 To motivate the worshipers and to make them aware that the mosque is open now – is the reason behind this. It’s called from the minaret, however now a days its broadcast through the loudspeakers on the minarets of the mosque 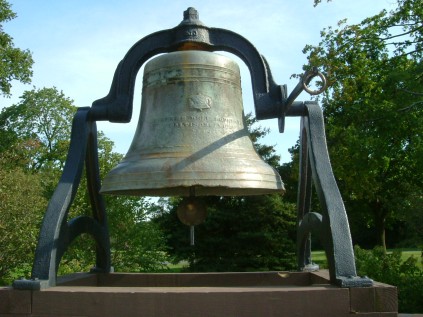 We all have heard the Church Gong a several times, even if you haven’t been inside a church ever. Bollywood and television give us a little peak into all the religions, including Christianity. May it be Josh, DDLJ or PK, we all have seen the beauty of the churches.

The purpose of the church bell is mostly same as Azaan in the mosque, that is to call worshipers and inform them that it’s time to pray. The bell is rung for a variety of ceremonial purposes. In Christian tradition it is also believed that, the sound of bell wards of demons, see Peter Parker knew loud sound scare negativity!!

The fact that I was unaware was that its an art to ring the bell, and people can take it up as a hobby. It’s a group activity and teaches many things from social-skills to team work, providing goo music therapy too.

Here is a link to an youtube video, where people in Ireland are trying to reviving this art of bell ringing. 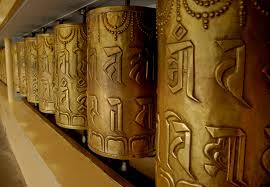 When you see or visit any place that has Buddhist culture, you see large cylindrical rotating structures, I was unaware that they have a name too. They are called Prayer Wheel. They are mostly seen in the monasteries of Tibet and Bhutan. These prayer wheel carry scripts inside it written on paper with a prayer “ॐ मणिपद्मे हूँ (om mani padme hum) which means ‘The jewel is in the Lotus’, The first word Aum/Om is a sacred syllable found in Indian religions. The word Mani means “jewel” or “bead”, Padme is the “lotus flower” (the Buddhist sacred flower), and Hum represents the spirit of enlightenment.

Many monks including Dalai Lama phrase the benefits and goodness of chanting this. This mantra is supposed to guard the person chanting it from all forms of evils as well as drive them towards god by improving their Karma.

Prayer wheels are used for meditation. 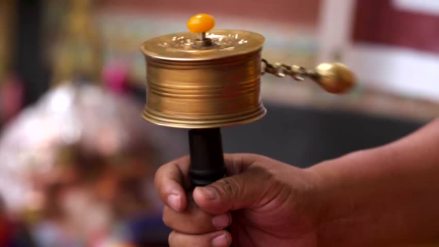 Although these wheels don’t make loud noise, but a creaking sound comes from the small prayer wheels, and a bell is hung at one corner of the large prayer wheel to make a soothing sound while meditating. 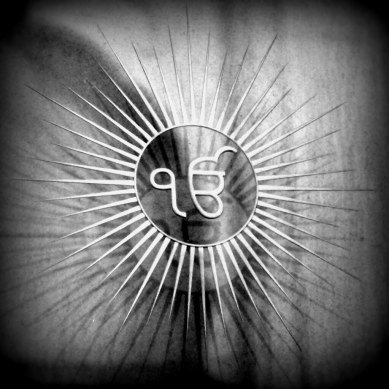 I had my first closed brush with this powerful chant, when I watched Rang De Basanti, the lyrics tucked my heart strings. This verse that starts with ik Onkar, is called Gurbani

Which means One Universal Creator God. The Name Is Truth. Creative Being Personified. No Fear. No Hatred. Image Of The Undying, Beyond Birth, Self-Existent. By Guru’s Grace 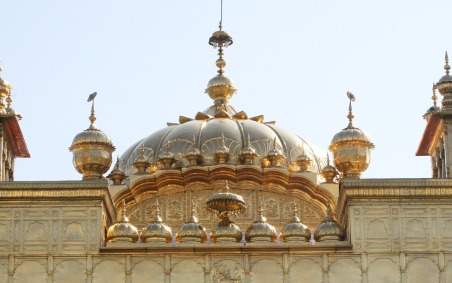 Ik Onkar is the symbol that represents the one supreme reality and is a central tenet of Sikh religious philosophy. Ik Onkar has a prominent position at the head of the Mul Mantar and the opening words of the Sri Guru Granth Sahib.

The continuous chanting of this mantra not just helps in meditation and peace of mind but also shows us the path to get closer to God by emphasizing there is only one God.

The musical instruments really play an important role, so that the sounds of Oum stays in our mind for long. 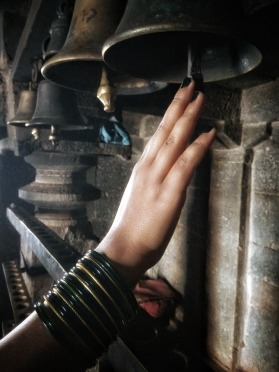 It looks more or less similar to the church bell, however Hindus have a miniature form of it in the temples at home as well. Ghanti when its small and Ghanta when its huge, there is lot of scientific as well as religious logic behind when and why one should pray along with the bell ringing.

The religious reason is that, the nature came into existence with a big bang, and similar frequency is generated by the bell or ghanta so that the existence of nature remains as it is now.

It is said that when we ring bell at home or at temple, it creates or resonates and generates such energy that pushes stress, negativity as well as diseases. The gong at the temple, when creates a loud sound it helps in both the brain lobes to align providing peace and concentration. 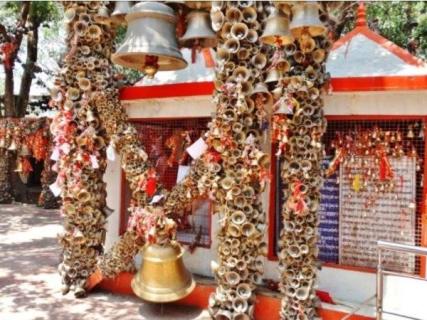 India is full of surprises, and we have many temple. In Nainital, Uttarakhand there is a Ghantiwala temple. People worship Golu Devta, who is considered as God of Justice and incarnation of Lord Shiva. People write application n non-judicial bond paper with their pleas, and once their wishes are fulfilled they thank the God by tying bells showing their gratitude. 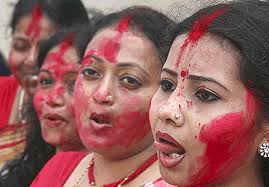 When ever Durga puja comes this sound of Ululation reminds us f festivities, not just in Bengali weddings but in most of the ceremonial occasion’s females make this sound. Remember Vidya Balan’s Kahaani where during the climax of the movie we see women making that sound.

This sound is produced by emitting a high-pitched loud voice accompanied with a rapid back and forth movement of the tongue and the uvula.

It is also supposed to ward off evil and bad spirits.

I love writing blogs on new topics as it increases the knowledge base and makes me feel enriched, for an example I always thought the In india only Bengal and some places of North east India has the tradition of Ululaton, however it took me by surprise that this is common in Kerala and Malayali people call it Kurava. The practice and reason for doing it remains same. 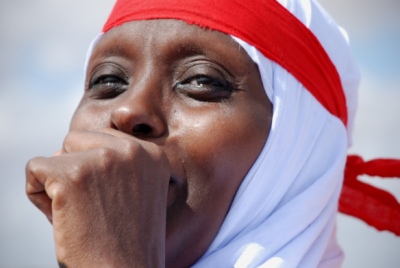 Further to add its not just India, rather the roots of ululation are Latin and its practiced in Egypt, Middle east, Gulf as well as countries through African sub continent. It is called zaghroutah. There is lot to know and lot to learn in every field.

Names and shapes can be many, but these instruments create a bass and are used in worshiping god in most of the religions. We see them at temples during bhajan, kirtan and arti. We can hear them at gurudwara’s as well as mosques too.

It can be seen durga puja where everyone loves to do the dhunichi dance on the beat of dhol or sufi songs at khwaja ji. Which ever is the place and occasion, venue and religion the beats makes us forget the present and go deep into devotion. 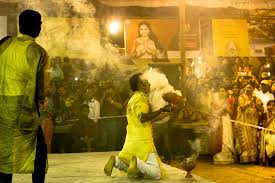 Irrespective of religion, there’s certainly one theme that runs common. The power of sound. There are some frequencies that humans can hear and then there’s a Hertz world beyond our capability. The newest fad to have caught up is that of Subliminal Therapy and Delta Waves. They are said to hold immense hypnosis and healing power. YouTube is filled up with all kinds. How these magical sounds stand apart from regular conversation? Simple!! During conversations, generally people don’t listen with an intend to understand. They listen with intend to reply. These sounds seek no acknowledgement. These are powerful emotion that rightfully find their way into our soul, through our ears.

174 thoughts on “8 Sounds of Religion #MyFriendAlexa”